Ashley Davenport is a loyal, yet ambitious, employee of the Grayson family. Ashley is so ambitious that she betrayed Emily to gain the trust of Victoria Grayson, a gambit that ultimately failed. She is Tyler Barrol's ex-girlfriend; their relationship ended when he had a psychotic break at Daniel's birthday party, and when she discovered Tyler's sexual liaisons with Nolan.

Ashley is originally from Croydon, England. She is a social climber on the rise and Emily’s closest friend in this world. She has the skinny on all the inner circles of the Hamptons, and access to all events in the elite social scene. Making a name for herself as the go-to event planner, Ashley hopes to gain entrée into Victoria Grayson’s good graces and solidify her status amongst the Hamptonites.

However, it was shown in "Lineage", that her first time in New York was not as successful. Since her art history degree was not very useful when looking for a job, she considered prostitution as a way to make rent. Luckily, when Ashley went to a club owned by Russian mobster Dmitri Bladov to offer her "services", Emily spoke to her through a door and gave her a lot of money in exchange for information about Dmitri, allowing her to get a new life. However, Ashley never learned Emily's name and Emily apparently hasn't remembered hers.

In "Pilot", Ashley welcomed Emily to the Hamptons. Ashley was the organizer of the Memorial Day party so she had a lot of work. She couldn't met with Emily who was waiting for her at the South Fork Inn. At the party, she introduced Emily to Victoria Grayson.

In "Trust", Ashley found Emily in the Polo match and bringed Emily to the VIP zone. Then she organized, with Daniel, a Housewarming Bash for Emily.

Ashley Davenport wants more, plain and simple. A social climber who, last summer, was stuck on the bottom rung of Victoria’s payroll, Ashley did anything and everything “the Queen” needed her to, from throwing parties to running errands.

It was Ashley who brought her good friend Emily Thorne into the circle of the Hamptons elite, not realizing Emily’s true agenda, or it’s repercussions. But Ashley has an agenda of her own, wanting nothing more than to become the woman she’s often been seen following behind. Victoria’s shoes, however, are big - and expensive - ones to fill.

Ashley started dating Tyler Barrol who convinced her that they had been playing too nice and manipulated her into helping him with his schemes against the Grayson family.

Ashley began to show her true colors when Daniel Grayson was arrested for murder last summer, leaking photos to the press while on the flip side taking up the spotlight as a spokesperson for the Grayson family. Afterwards, she was considered for a job at Benjamin Brooks', Daniel's lawyer, office, but he rejected her when he learned that she had leaked the photos. Conrad liked what he saw in her, and offered Ashley a position at Grayson Global. She took this opportunity a step further when she disclosed to Daniel that she saw Jack and Emily share a kiss, ultimately destroying their relationship. This left an empty space around Daniel’s arm. A space Ashley gladly seemed happy to occupy.

In the beginning of season two, Ashley is in a relationship with Daniel and has assistants of her own, though she still works at Grayson Global. However, this romance came to an end when Aiden informs him that Ashley is in a hotel with Salvador Grobet (he wasn't aware that Ashley was blackmailed by his mother for the video showing her sleeping with Conrad).

In "Masquerade", Conrad becomes increasingly suspicious of Ashley and her role in his campaign. When he berates her for allowing a question about David Clarke to come up during a Q&A and warns her that she should start looking for a new job when the campaign ends, Jack overhears her and recruits her to help him in getting payback on Conrad. She helps him by revealing Conrad's association with Alison Stoddard, the wife of his opponent.

At the end of the season finale, Ashley is still in league with Jack and standing by to play the recording of Conrad and Nate.

In "Fear", Ashley once again found herself without a job. Having spent all the hush money Conrad gave her she is quite desperate and decided to blackmail Emily. Emily agreed and set Ashley up with Dr. Jorge Valez. When Conrad's Huntington's disease was leaked to the press, Emily successfully put the blame on Ashley. Thinking Conrad wanted to meet her, Ashley arrived at Hampton airfield and found Victoria and Emily. Then they banished her back to her hated hometown of Croydon and warned her never to return.

Ashley is very ambitious and although she secretly hated the Grayson's she tolerated them for the sake of success and money. She appeared to be loyal, but considering that fact that she loathed the family, it is almost certain that her loyalty was not genuine. Ashley was a best friend of Emily Thorne, being one of the few friends Emily had, although she later betrayed her.

Amanda and Ashley used to be best friends before they came to the Hamptons. But this changed when they both climbed through the Grayson Family as Emily succeeded and Ashley didn't. After this their relationship as friends ended and their relationship as enemies began, when Ashley began dating Daniel. When Emily and Daniel got back together, Ashley threatened to expose Emily's true feelings towards Jack to the Graysons, resulting in Emily sending her back to Croydon. 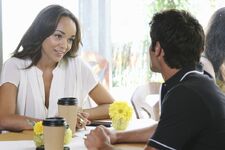 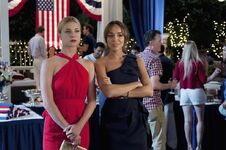 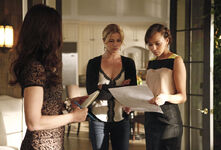 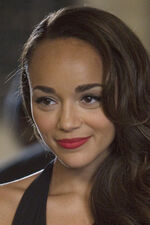