Lydia Davis is Victoria Harper's ex-best friend, Conrad Grayson's fiancée, as well as David Clarke's former secretary. She was also Amanda Clarke's first target for revenge - she was bribed by Conrad with $10 million to lie on the stand against Clarke at his trial. After exposing Lydia's affair with Conrad, permanently ending her friendship with Victoria, Emily makes it look like Lydia is responsible for ruining the lives of her other initial targets - Bill Harmon, former District Attorney Tom Kingsly and Dr. Michelle Banks. In the season 1 finale, Lydia was onboard a plane taking her to testify against Conrad, but she was supposedly killed when the plane exploded.[1] She is revealed to be alive at the end of Secrecy, but was later framed and taken away by the orders of Conrad in order to protect his son Daniel for shooting his wife Emily on their wedding night.

Originally a lowly secretary, with the Grayson's support Lydia  soon came to be at the forefront of the Hamptons elite society. Lydia started off as David Clarke mousy but greedy assistant. She readily agreed to help frame her boss in exchange for  $ 10 000.000 and a fast track to a luxurious life in the Hamptons. She soon married Michael Davis, an old friend of Conrad's. Though Victoria accepted her into her inner circle and became her closest friend, Lydia didn't think twice about starting an affair with Conrad that went on for years. Around early 2003 Lydia and Michael also became the proud owners of the Clarke beach house after learning that Conrad and Victoria were in fact the owners and wanted to rid themselves of it. Lydia and Michael's relationship soured and eventually he began seeing a younger woman (possibly an ally of Emily)  before the pilot, the couple  had decided to separate.

In "Pilot", Lydia was divorcing her husband Michael Davis. Lydia was also having an affair with Victoria's husband, Conrad Grayson. But when Conrad had an attack at the South Fork Inn, Emily saw her and told it to Victoria Grayson and she banished Lydia from the Hamptons.

In "Trust" Lydia told Conrad that she was ruined as somebody sent photos of her and Conrad to Michael.

Lydia later lost all of her wealth due to the affair being leaked to her ex-husband, Michael Davis after Emily sent the pictures to him. Emily frames her for the crimes, which she did to throw Victoria off her trail.

After looking at an 8-year old picture of Emily, then still known as Amanda, working at a benefit she attended, Lydia tells Frank, the former FBI agent who works for the Graysons. Victoria confronts her about "her misdeeds," such as the Hampton Exposed website. Lydia falls into a coma after falling off her roof (most likely because of Frank) and onto a parked taxi below. Somehow, she survived and recently woke up, though she suffered some short-term memory loss.

In "Reckoning", she boarded a plane with Victoria, which ended in a terrible explosion, thus presumably killing her[1] and leaving Victoria's fate unknown until Destiny, when it was revealed Victoria, thanks to the perpetrator, survived by getting off the plane before it took off.

In "Secrecy", we discover that Lydia is alive and somehow survived the plane crash. She phoned Margaux LeMarchal because she wanted to tell the truth about Conrad Grayson and they met in a parking garage in the city.

In "Surrender", Lydia appeared in the Grayson Manor to get revenge. But Victoria told her that it was all Conrad's fault. Then she met with Conrad trying to record him confess but she got nothing, in fact she fell in love again. She returned to the Grayson Manor to apologise and she found the 2002 Grayson New Year's Bash photo were Emily appeared.

In "Exodus", Conrad discovers Lydia's notebook with the necessary to incriminate him and banishes her from his life. She blackmailed Emily in order to get back her house then she went to Emily and Daniel's wedding but Aiden told her that she will get her house today but she had to leave the wedding. Conrad later learned she had a change of heart and welcomed her back into his life. Lydia showed Victoria the photo of Emily catering at the 2002 Grayson New Year's Bash and Victoria realized that Emily has been after their family for years now.

In "Homecoming", Lydia lies to the police about her whereabouts when Emily was shot. She enjoyed the possibility of Victoria going down for shooting Emily and even spilled wine on Victoria's favorite chair. When Victoria found proof that Lydia had lied to the police, she told Cornad that Daniel was the shooter hoping to convince him to frame Lydia to protect Daniel. Conrad told Lydia he would protect her and sent her away from the Hamptons. Now she on the run and a fugutive.

Victoria and Lydia were once best friends. Their relationship was ruined after Victoria discovered the affair between Lydia and her husband, Conrad. Lydia then helped Victoria take down Conrad, act that lead to her fake death. When she returned to the Hamptons they seem to be friends again but that ended soon when they fought for the Grayson Manor.

Conrad and Lydia started out as friends, seeing as Lydia is the best friend of Conrad's wife, Victoria Grayson. Lydia, though, had long been attracted to Conrad and, when she decided to act on it, Conrad soon returned these feelings. Following Lydia's banishment from the Hamptons at the hands of Victoria, Conrad gave Lydia a loft, $10,000,000 and eventually a marriage proposal. Their sexual affair was exploited by Emily, and was a catalyst in the divorce between "Lydia and Michael Davis.

Amanda and Lydia became enemies from the day they met, Lydia helped frame David and Amanda turned Victoria against Lydia. Amanda managed to kick her out of the Hamptons, but she returned asking for revenge twice. The second time she exposed her to Victoria which led to the shooting in Amanda's wedding. 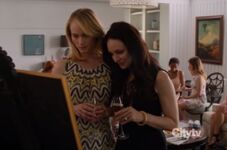 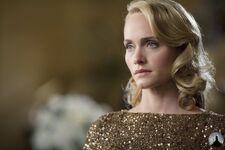 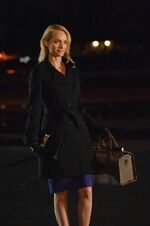 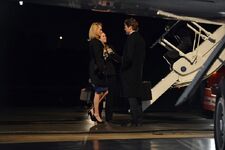