Leo Mason Treadwell is a true crime writer and was one of Emily's targets. Originally an accomplice in the frame-up of David Clarke, he went to prison after a deal with Emily Thorne, wherein he will spend his time in prison writing the true story of the Clarke family. Later, Emily broke Mason out of prison and sent him away, so Mason would stay quiet about Emily's identity.

Originally an accountant up to his neck in debts, Mason became a journalist and covered the Flight 197 incident, in particular David Clarke's involvment in it. He interviewed David Clarke in prison, as well as his daughter, Amanda.

During the interviews, he learned from David that he had been having an affair with Victoria Grayson and conceived a daughter with her. He approached the Graysons and interviewed them as well. When he brought up the affair, Victoria vehemently denied it and threatened to sue Mason if he went public with the story. Mason told her he was going to do it since he was already broke and had nothing to lose anyway, but was bribed by Conrad into covering it up.

Despite the revelations that could have helped the Clarkes, Mason decided to accept Conrad's offer and proceeded to write the book The Society Connection: David Clarke and the Flight 197 Tragedy, which painted out David as an evil man and reinforced the Grayson's cover-up. The said book made Amanda finally lose faith in her father and made her believe that David was in fact guilty.

At one point, Mason got in contact with Amanda's foster mother, Meredith Hayward around the time David began sending Amanda letters, which Meredith always intercepted and never gave Amanda. Mason bought the letters off her and kept it since then.

Over the years, Mason became wealthy and famous and soon became a true crime writer. In the meantime, Emily came to resent him for lying about her father and making her believe the lies told about him.

Mason first appears in "Infamy", when he shows up at the Hamptons to give a reading of his yet-unpublished memoir. Victoria asks him to talk to Amanda to find out why she is back. At the end of the episode, Emily gets her payback on him with Nolan's help. While he takes Mason out for dinner, she sneaks into his house, takes a bunch of his interview tapes and then lights a cigar and leaves it on his memoir manuscript. Pretty soon the house is in flames. When Mason and Nolan return, Mason falls to the ground, despairing about the loss of his things.

In "Doubt", Mason, having become depressed as a result of the fire in his house, is recruited by the Graysons to run a blog defending Daniel in the press while he is suspected of murder. The blog, intended to be used by the Graysons to turn the media's attention in their favor, is named "The Treadwell Report". At first, Mason plays along, but then he learns from Declan that Charlotte, who along with him had seen a hooded man (Jack) on the beach, had been abusing pills and alcohol at the party. Declan also claims the story of the hooded man is fake to protect Jack. Mason publishes the truth on the blog (possibly out of spite for Victoria) and is apparently thrown out of the Graysons' lives again.

Mason returns in season 2 after seeing the Graysons' press conference about Victoria's "kidnapping" and Amanda's relation to the family and deciding to investigate it. While visiting Amanda at the hospital, he catches a glimpse of her back and notices that she doesn't have a scar she is supposed to have gotten in juvie.

In "Penance", after Mason narrowly escaped death courtesy of Faux Amanda Clarke, Emily told Mason the truth. Afterwards, to repay her for slandering her father, she gets him to convince Kara to leave. Then, to repay Emily in full, he goes off script and tells her the whole truth about the frameup of her first husband and the Graysons' and his part in it. Angered, Kara goes to the Graysons and tries to kill them, but is narrowly stopped by Aiden. At first it appeared as though Emily laid down some knowledge on the Hamptons' most notorious writer in order to get him to work for her, but she had an even bigger plan. She framed him for the murder of Gordon Murphy, aka the White-Haired Man, and sent the police after Mason. He was arrested for the act, as well as Murphy's bombing of Victoria's plane (as a result of the plane's burned flight recorder being planted in his home by Emily or one of her accomplices). Emily paid him a visit in jail. But she wasn't there to help him out of his soon-to-be orange jumpsuit - instead, she cut him a deal. Mason would confess to the crime without a trial and stay behind bars until Emily gives her own confession and gets him out. And in return, Emily will give Mason the whole story so he can write the book of the century, which he originally meant to write.

When Emily's former foster mother, Meredith, comes to the Hamptons, Emily learns from her former foster brother, Eli James, about David's letters that Meredith had been keeping from her. When she learns that Mason had bought them, Emily visits him in prison for it. Though the letters were destroyed when she burned down his house, he managed to read them and remembers the crucial details, particularly that there was only one other revelation in the letters that Emily did not already know: that Victoria has another son whom she gave up to foster care in her teens.

In "Blood", Victoria visited Mason in prison and asked him for information about Emily. Mason didn't say anything but phoned Emily and told her if she didn't show him her hand in twenty-four hours he will tell Victoria the truth. Stevie Grayson made Mason an offer that he refused, so Emily had his death faked and Nolan supplied Mason with a passport and new identity.

In "Burn" Mason returns to the Hamptons, and is angry that Emily broke their deal, and publicly revealed herself as Amanda, giving other journalists access to the story she had exclusively promised Mason. Mason taunts Emily about how she had given up her chance at happiness to seek revenge.

In "Aftermath", Emily meets with Mason and he demands that she clear him of Gordon Murphy's murder. Emily delivers some of Conrad's documents to the police that exonerate's Mason and makes it appear as though Conrad had Gordon Murphy killed. After Emily is arrested for Victoria's murder, she realizes Mason was working with Victoria to set her up.

An admitted egotist, Mason is driven by a lust for fame, though a genuine sense of integrity occasionally shines through. Though he still has a lust for fame, he has apparently grown since the David Clarke incident and still, on some level, cares about telling the truth. It has been shown more than once that he does feel some remorse for framing David and towards Amanda for writing lies about her father. 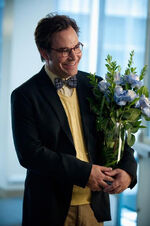 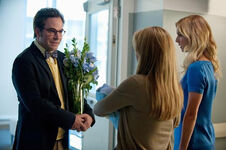 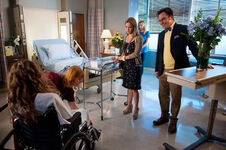 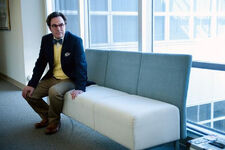