Padma Lahari was NolCorp's CFO. A young go-getter, strongly encouraged Nolan to appoint a new CFO, a position she eventually got. At first he didn’t want anything to do with sharing his company, but she eventually won him over. As a surprise, he appointed her rather than someone with much more experience.

Padma was born outside the U.S., but has lived and worked there for years. When she was about to go to a job interview at J.P. Morgan, her grandmother became ill. Because it couldn't be rescheduled, she went to the interview and her grandmother passed away almost immediately before she could visit her. At some point, she got a job at NolCorp as an accounting analyst.

Padma was shown to be very quirky, with a nerdy, charming side of her that was always in effect. She seems to be a portrayal of the grown up version of the girl in high school with no friends with a heart of gold, and personality to match. These things about her appeal to Nolan Ross, her boss and romantic love interest. So far she has caused no trouble and seems to be a genuinely, nice person, although she does seem to show hints of jealousy towards Emily in terms of her relationship with Nolan. Nolan was quite comfortable around her and they get along well. She also seems to be very loyal to Nolan, and pledges this to him when his company is being taken over by Grayson Global - vowing to help him get his company back. However, with the arrival of Marco, Nolan's ex-boyfriend, fans have speculated that there could be a darker side to her that we haven't seen yet. At the end of episode 11 season 2, we see Padma speaking with Helen (a known member of the Americon Initiative) telling her that Nolan had hidden a secret program inside his company. As of recent, it appears as though Padma was working for the Initiative. However, this cannot be confirmed; it could be that she was working for Helen alone, rather than the organisation itself, and may not know of the Initiative or its role in the terrorist attacks. In Sabotage, Padma's goal was revealed to be obtaining Carrion, an old development project of NolCorp's that is capable to drain all of Manhattan of electricity. Her reasons were unknown, but may have been related to Daniel's recent purchase of Stonehaven United Solutions, a disaster recovery firm.

In "Union," Nolan confronts Padma with the knowledge that she is spying on him. He also asks her about her father, with whom she used to speak daily but with whom she hasn't spoken in a month. She tells him that he disappeared then, after which she was contacted by "a woman" (presumably Helen), who told her that they (presumably the Initiative) were holding him and used it to force her to assist Helen in obtaining Carrion.

Later in the season, in episode 14 "Sacrifice" Nolan introduces Padma to Aiden Mathis in order to retrieve more information on her father, who is currently being held hostage by the Initiative. Padma tells Helen she is unwilling to relinquish Carrion until she is certain her father is alive. A man, another representative of the Initiative, informs her that Helen is out of the picture, and as proof of her father's survival, mails Padma his severed finger.

In "Victory," Padma is contacted by Trask and is told that her father is alive. She is to hand over Carrion to him. While she arranges a meeting, Nolan recruits Aiden to eliminate the men guarding Padma's father when they see him with them. In an alley, Nolan and Aiden set up a sniper rifle on a rooftop to oversee the exchange. Trask arrives with some henchmen and gets the flashdrive with Carrion, into which Nolan has built a tracking device. After verifying the flash drive's contents, Trask lures Padma to the trunk of the car and kidnaps her. Nolan and Aiden follow the tracking device's signal only to find it in an empty house in a box, having been found by Trask and the others.

In "Masquerade," Aiden hijacks Trask's car at gunpoint and forces him to drive to where the Initiative are keeping Padma. Trask takes him there and reveals that Padma is dead, having been kept alive for six weeks for unknown reasons before being killed along with her father.

In "Truth, Part 2," the reason Padma was kept alive for so long is revealed. After Nolan is arrested on suspicion of being involved in the Grayson Global bombing, the FBI presents him with a video where she is, presumably after being pressured by the Initiative's men during the six weeks, claims Nolan is a member of the Initiative as well as an anarchist.

Nolan and Padma have known each other since Season 2 Episode 2.

He seems to be genuinely fond of her and they have a budding friendship . However, Padma has indicated that she may have grown a slight infatuation with Nolan. So far he has not yet reciprocated any feelings of romance towards her and thinks of her as a friend and business partner. The two have been cited to be future love interests later on in the season, and, given the chemistry they both obviously share, that could very well happen.

In episode 4 "Intuition" their relationship quickly grew from platonic to romantic. While looking through mail (dated 6 months back) Padma discovered a letter regarding an auction sale for his father's belongings. When discovering this, she found out that his father died and asked why he didn't tell her. He replied that he didn't know his father was dead until now and she gave him the key to his father's storage area, despite the fact that he asked her to drop it. Later, he was looking up information on his father's death, and became distraught and close to tears. Padma asked him what was wrong and he replied that it was nothing and walked out of the room to "get some air"; clearly, he was upset and heartbroken by this news and left his father's storage key on the desk. Because of her prodding nature, she went to his computer and saw the article he was reading about his father's death and swipes the keys that were abandoned on his desk.

Later on, having gone to the storage unit first, she went to Nolan and presented him with a scrapbook his father made of all of his achievements. At first he is unwilling to even look at it, but she encourages him to do it, stating that if he doesn't allow himself to properly grieve and honor his father, he will regret it and "regret sucks" (she says this from past experience with a similar incident involving her grandmother). Nolan begans going through the book and with each page becomes more upset over the fact that even though he hasn't spoken to his father in years, his father still loved him and was proud of him.Tearfully, Nolan gives in to his curiosity and emotions, and asks Padma to take him to his father's storage unit.

While in the storage room, Nolan began's looking for some things to keep and they stumble over some investment and stock papers from when NolCorp began, in his father's basement. Nolan explained that when NolCorp began taking off, before his junior year in high school, he decided to drop out of school and his father kicked him out because of that; they haven't spoken in years. Nolan then thanks Padma for taking him there and understanding his situation. She says that it's her job to take care of him, but he believes there is more to it than that. While leaning over a pile of boxes, he attempts to kiss her, but the boxes tumble under him and, in a rather sweet moment, he trips and falls. Once he stands up again, embarrassed and flustered, he asks if they can try again. And they do; he kisses her.

While getting ready to leave, Nolan, still high from his kiss with Padma, offered to take her to Paris for where they could eat dinner and relax after a long day. She replied yes and as he got ready to start the car, she spotted a void check written by David Clarke to Nolan (an early investment in NolCorp) and stared off with a hint of recognition on her face.

Their relationships seemed to have progressed into the intimacy phase. The have also seemed to have gotten closer not only physically, but emotionally. This is seen in episode 5 "Forgiveness" when an inquiry about David Clarke's investment in NolCorp is brought up by Daniel. It turns out that the request was made by Padma and she lied about it to Nolan. Nolan seemed genuinely hurt and thrown off by this news, given by Emily.

In episode 6 "Illusion" he confronted her about it, questioning her motives and intentions toward the act. She apologized and didn't tell him because she didn't realize her mistake until later. He believed her and asked her how far she was willing to go to protect them and the company. However, recent developments have suggested that Padma's ultimate goal was to obtain Carrion. 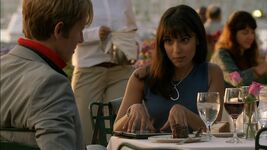 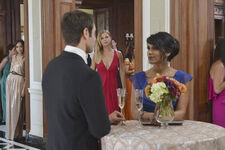 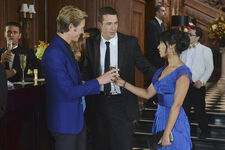 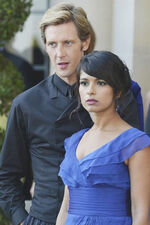